Reposting this from the Kickstarter Update. A word to whet the appetite of any good zombie! Today the latest version of the MeBrain or Brains board has been sent for a prototyping run at Ragworm in the UK. It’s totally redesigned in the last few weeks due to a revelation in design from fellow Kickstarter Ben Pirt. Take a look and see if you can see what’s been done.

Did you spot it? Well on the PCB it could well be a lack of it. The bill of materials (BOM) on the PCB has been drastically reduced. It now just contains a voltage regulator, a level shifter, a diode, a resistor and a bunch of decoupling capacitors. “Where have the Brains gone?” I hear you cry – well that’s the clever bit stolen from Ben Pirt. Rather than reinvent the wheel, layout an Arduino Leonardo board again and have all of the parts pick and placed on a custom design I’ve decided to use a plug in solution in the form of the Arduino Pro Micro – or more accurately clones of said board. The final Brains PCB will have an attribution to the original designers of the Pro Micro (the wonderful folk at Sparkfun) as the clone boards never do! And will also carry some other attributions to the clever and wonderful people who have let me steal their ideas whilst bringing the board to life.

It will also be apparent that I’m a little behind on schedule. The process of pulling apart business interests in the MeArm was fairly costly in terms of time (not to mention money) – but the project is again going in the right direction and building some momentum. I’m really happy with the new layout of the board and think that it makes it fit better with the ethos of the original MeArm. In that when a new board is spun out there will be an easy and cheap upgrade path as you can pull off all of the parts from your old board and plug them into the new one, the only tricky soldering being the bluetooth module – but as I’ve selected the popular HM-11 bluetooth low energy module replacing it isn’t likely to break the bank.

Although I’m doing everything I possibly can to deliver on schedule I’m mindful of the words of Shigeru Miyamoto “A delayed game is eventually good; a bad game is bad forever.” I want the MeArm to be a really good game!

Once I’ve worked out Github again I’ll share the KiCad files – so those with some knowledge can point out my errors! Watch this space for updates!

Thanks again for your patience and support.

Using Mirobot to learn programming has always been one of its major aims. Most children start off their programming journey using a visual programming language (such as Scratch) and there’s been the Blockly interface for this since Mirobot Apps was launched. Being able to use the addons for programming is something I’ve always wanted to be able to do but unfortunately this was somewhat tricky to achieve in Blockly. Fortunately there’s a fantastic open-source visual programming language called Snap! that was much easier to integrate - it’s also much more similar to the Scratch environment that children are used to. 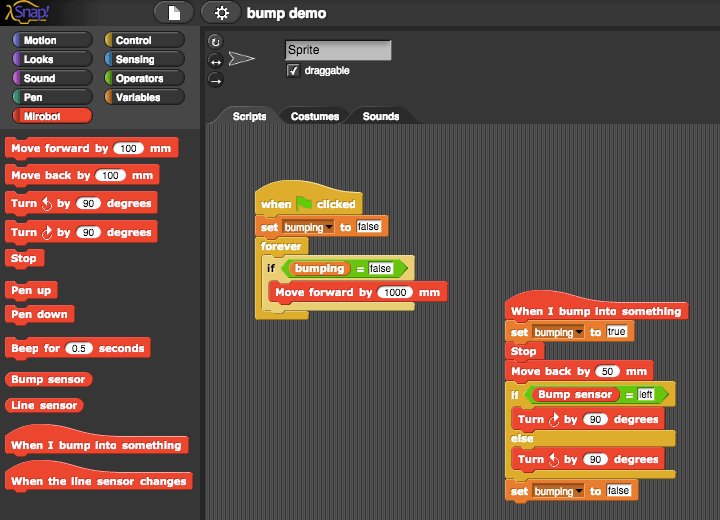 The Mirobot Snap! App now gives you direct access to the sensors which means you can do some neat reactive programming like you can see above. The piece of code above implements what was previously built in to the Mirobot firmware and enables learners to understand what is actually happening. You’ve also got all of the usual movement commands that you’re used to using already of course.

You’ll need the latest firmware to run this app as it adds a sensor access API. Happy snapping!

Intel RealSense is not something I’ve come across before seeing this video but it’s definitely something I’d like to investigate further. At $99 it seems a real steal to get your hands on a developer version of Intel’s flagship gesture control camera. It would appear that you reserve online a $1 and then are selected to receive the pack, for just another $98.
Fortunately for the MeArm one of the people who received a developer kit was Bryan Brown, who also it seems has been shopping at Adafruit and has a nice Heisenberg Blue MeArm! Bryan put the two together with some magic sauce (and not yet open source!) and came up with this fantastic gesture control MeArm.

One of my favourite MeArm videos on Youtube (by Robert Fischer) was made using a program called the BoBPoser Application.
BoB is a cool Bipedal robot featured on Let’s Make Robots and the application was developed for the FOBO Robot (as seen here).

If you’ve not yet got your hands on a MeArm or controller check out our Kickstarter!