Make. Hack. Do at the Science Museum, London.

At the beginning of this month I had a great opportunity to run a workshop at the stupendous Science Museum in London. Admittedly this was my first time to the museum that I can remember. School always favoured the Natural History Museum next door, because dinosaurs. I could write another blog on my my love of the Natural History Museum, it was a really special pleasure to walk past it on my way to work for five days. 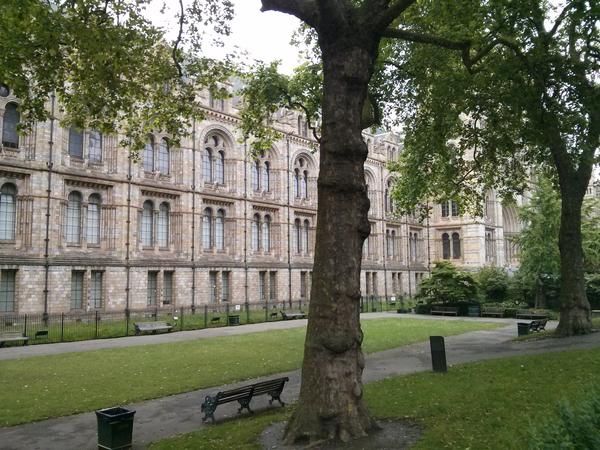 It’s a beautiful building that still gives me chills thinking about its contents and my childhood geeky wonderment.

The Science Museum was going to have to be pretty special to compete and oh my gosh it really is special. As I was there to work I wasn’t able to enjoy the exhibits quite as much as I would have liked but it was something quite special to walk past items like Stevenson’s Rocket, a Rolls Royce Merlin Engine and a full sized Lockheed Electra airliner as I meandered my way to the Make. Hack. Do event. 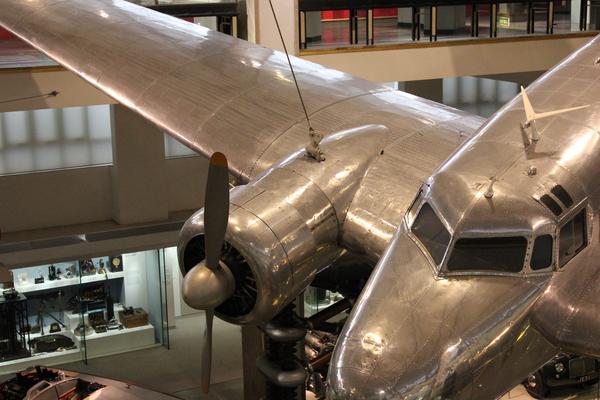 Make. Hack. Do was set out to allow people to create electronic instruments from vegetables, build and program robots and get hands-on with 3D printing in a free festival. Where participants could design, hack and program in a series of workshops and meet the artists and inventors using electronics and 3D printing in innovative ways. It opened with a “Lates” event where grown ups with beer came along to find out what we were up to. It was a great way to start the festival as it was possible to test my plans of how to run the workshops, with an understanding, relaxed yet enthusiastic crowd. 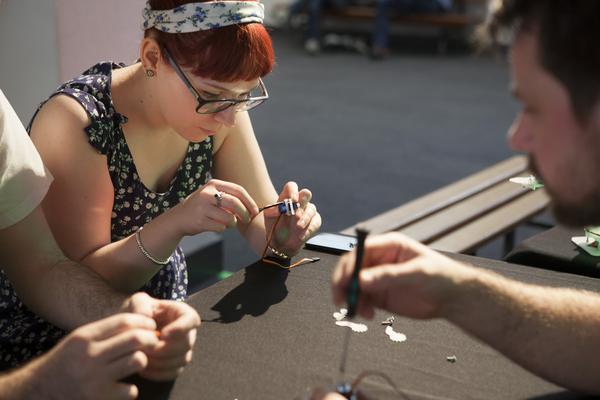 The next four days were advertised as suitable for ages 10 and above, in reality as long as a child was able to be attentive and hold a screwdriver they got to build robots! One lad came over and told me he was only five but he was “very good” and proceeded to build his claw faster and better than a group of 12 year olds that built along with him! Other workshops and activities included exploring creative uses of electronics and 3D printing, creating colourful 3D printed sculptures, helping stitch a tapestry made of electronic thread and sculpting circuits with special electronic playdough. It’s possible we’ll be copying the squishy circuits workshop locally in August. 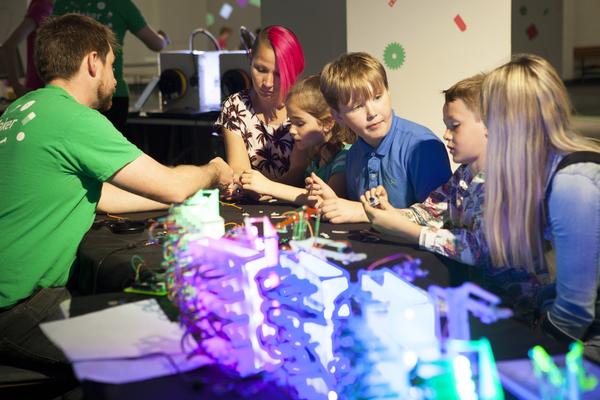 It was quite incredible to be among some fantastic artists and inventors from across the UK at Make.Hack.Do demonstrating how electronics and 3D printing can be used for art and music. Musical objects hacked together by Royal College of Art students were on show and along with some intricate 3D printed art by Tobias Klein. LiveCodeLab showed how anyone can create live music using computer coding and Ototo turned furniture, toys and even vegetables into musical instruments using electronics. 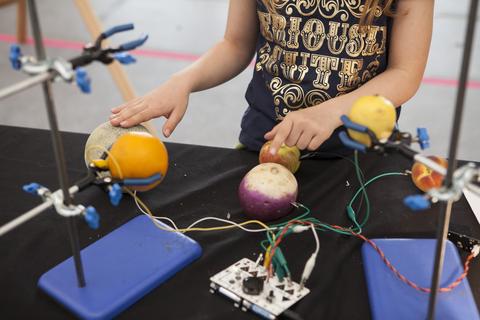 One of the many highlights of the festival was meeting this young man and his father who were visiting from Switzerland. In the last week he’d downloaded the files of our #meArm robot arm and cut his own from balsa wood using a CNC milling machine. He had me sign a flier! It was fantastic meeting someone who had built their own arm, one of the many reasons we support open hardware. I think he wrote this in the guest book too. Really made my day! 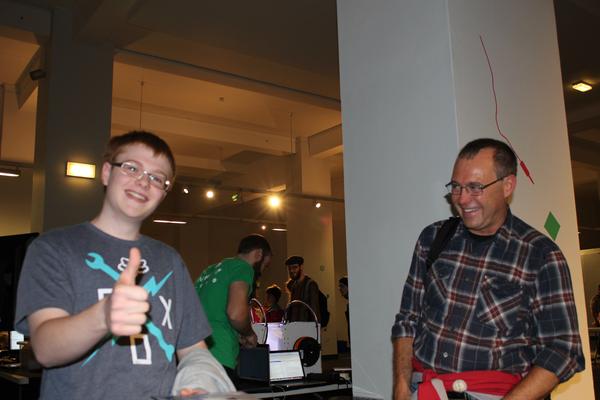 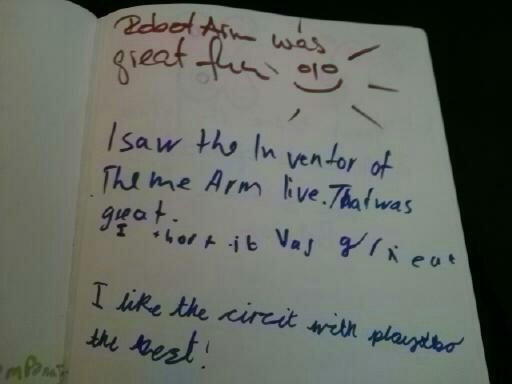 The festival was supported by Airbus Group, Renishaw, the Engineering and Physical Sciences Research Council (EPSRC) and the University of Nottingham. Two of whom supported my PhD, so extra thanks to EPSRC and the University of Nottingham. There are thanks for all of the organisers and volunteers. It was really well run and I was even able to take a break for lunch, that’s really special in an event like this! 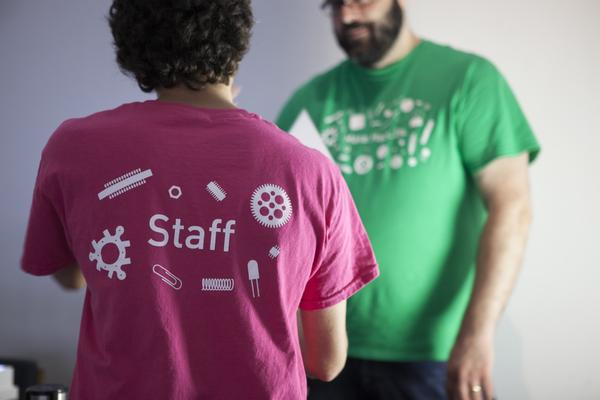 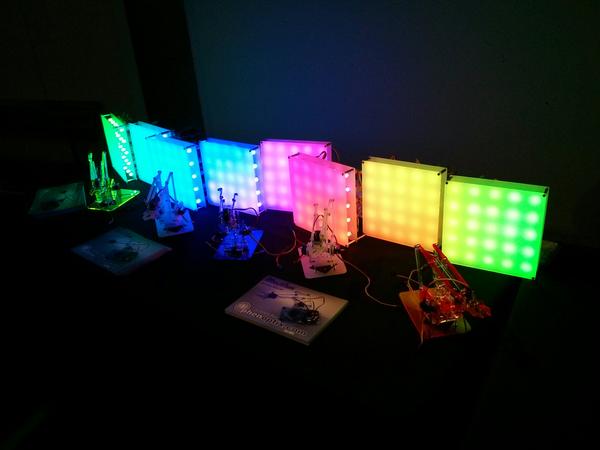 Overall it was an amazing five days and a spectacular event in a world class venue. It was great to be a part of it.

So v0.4 has been kind of complete for a while, there are a number of tweaks I want to apply but they’ve not yet made it to the plans. Should really just publish and be dammed but I do like to take some good pictures of a new version and I’ve not had the time to do that hence not published. 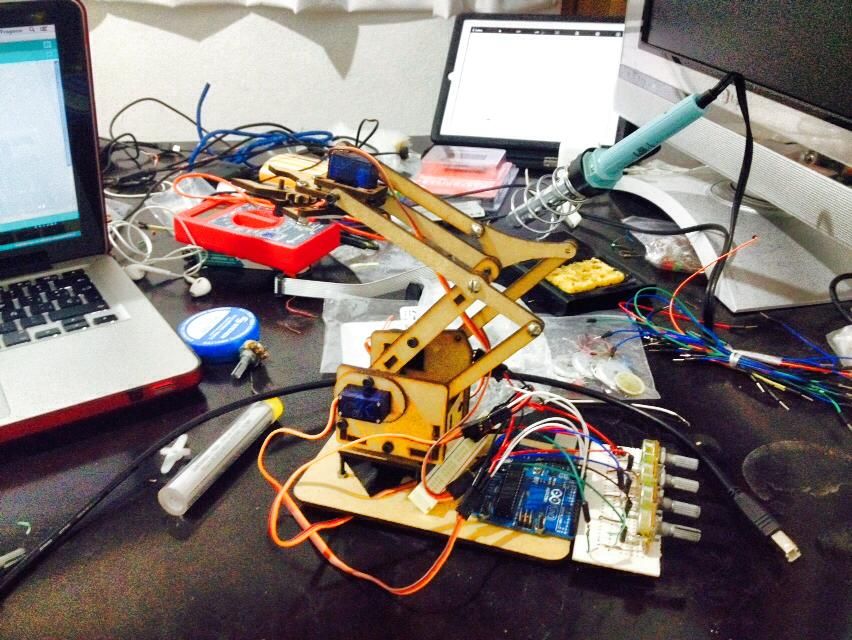 Have had a lot of feedback on v0.3 and have now seen versions built in the UK, Switzerland, the USA and most recently Mexico (image above is the Mexican MeArm)! Not bad from a little robot arm from Nottingham England! Jack’s design for the v0.3 has been a real success. Lots has been done on the code and I’ve now see it run on Arduino and the Raspberry Pi. Some great work has been done by Bob Stone on this front. His github repos are amazing https://github.com/RorschachUK

The meArm was also very fortunate to be invited along to the Science Museum in London for the Make.Hack.Do festival. We build around 10 arms and probably 100 of the grippers over a 5 day period. We (that’s me and the meArm) met a father and son from Switzerland (mentioned above) who had built a meArm from balsa wood on their home made CNC mill. They really made my day. There’s some video of the arm in action here:

Quite a bit more to tell but that will have to do for now!

It’s been a fascinating few weeks after launching Mirobot on Kickstarter. It’s an amazing way of getting a project off the ground and I’ve had a very positive experience so far. I’ve been genuinely touched by the belief and generosity my backers have shown. I thought a post on my learnings might help others on their own kickstarting journey because it’s a very worthwhile experience so long as you do things properly. 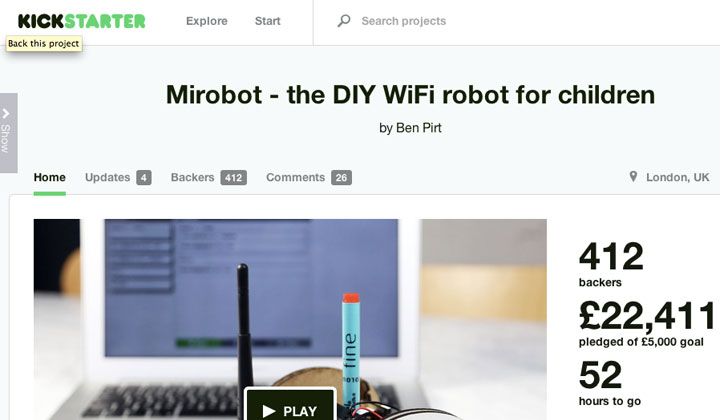 There are plenty more minor things, but these are the main points I’ve learned after putting Mirobot on Kickstarter. I’ll keep the blog updated as the project completes and I switch into delivery mode. In the meantime, at the time of posting there are still a couple of days left to back the project!

Bob Stone and Nick Moriarty of York Hackspace set to first building one of our very first MeArm Robots and then giving it some much needed brains by application of Inverse Kinematics. So that now you can provide a place in space with Cartesian coordinates (x,y,z) and the claw will go there. They’ve shared the code on Github as they are amazing and also a video on the youtube.