There’s a reason it’s been a few months since the last blog post; I’ve been working full tilt towards delivering all of the units for the Kickstarter backers. All of these have now shipped and I’ve had some really positive feedback so far which has been great. Lots of useful comments and subtle ways to improve Mirobot in the future.

One of the things I’ve found really interesting about production has been the devices that I’ve ended up making to speed up the process and I thought I’d share a few of these with you here. 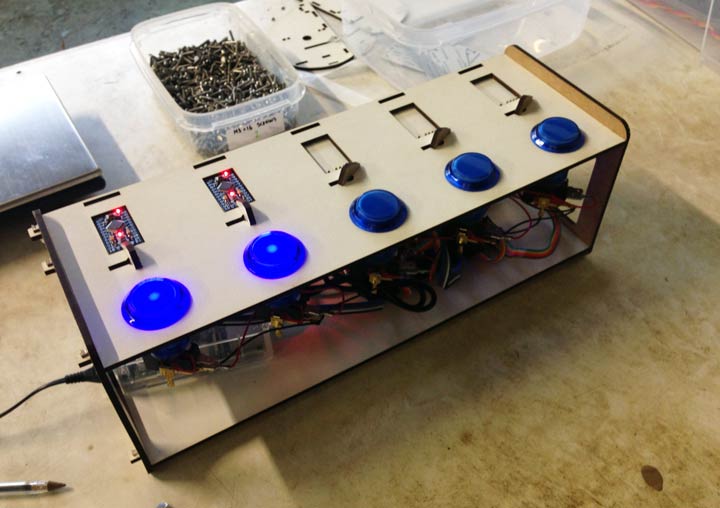 This is a 5 way Arduino Pro Mini programmer. It allows me to quickly put an Arduino into the jig, press the button and then program it. You can control each Arduino individually. It’s driven by a Raspberry Pi which runs a Node.js based programmer application that then programs the Arduinos over USB to serial adapters. There’s an Arduino in there too which handles the button presses and flashes their LEDs. It’s all open source: 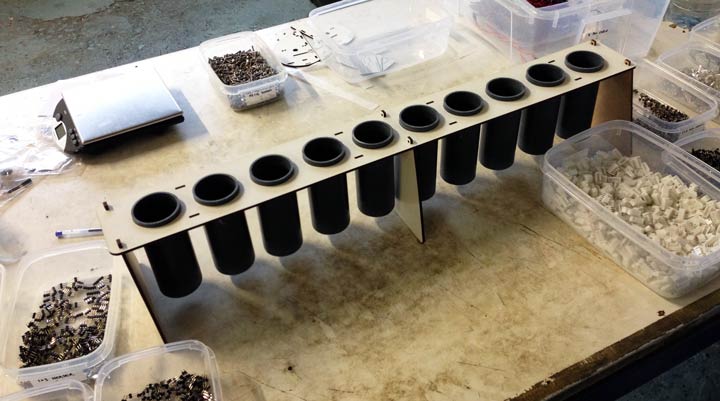 This is a handy stand for picking bags of components. Just put a bag on each tube and it will hold it open and in place so you can easily drop the parts in the holes. 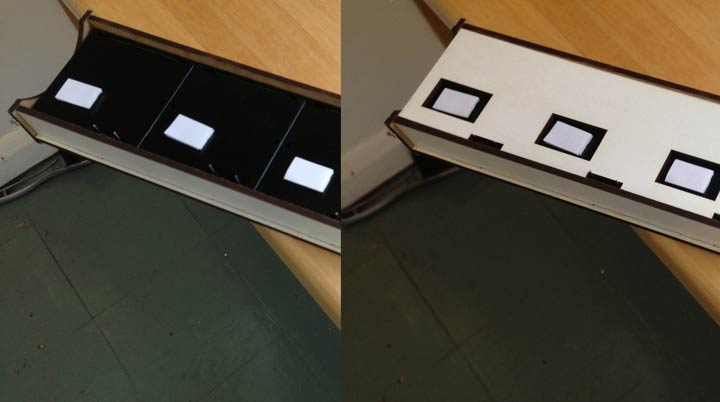 The battery boxes that come with Mirobot have long leads that need trimming down and also need a sticky pad putting on them for assembly. This is a simple little jig that lets you easily cut the pins to the right length and then gives you easy windows to put the stickers in.

I’ve found that if you can eliminate as much thought from the process as possible then hopefully mistakes will be less likely to happen. I’m really pleased I didn’t just farm out the whole process to a third party - I’ve learned so much from actually managing this for myself that it makes development in the future a lot easier.

I’ll be updating shortly on the plans for the future, but right now I’ve got lots of stock ready to ship out for Christmas, so hit the store!

Raspberrystore.nl stock a great range of Raspberry Pi Accessories and the first distributor of the #MeArm in the Netherlands. We’ll update you and link when the product goes live. They’re currently flat sheets awaiting laser time!

If you’d like to stock the #MeArm get in touch for distributor pricing and we’ll get you onboard! ben at phenoptix dot com

In this video when a sale is made in Salesforce the #MeArm “ships” the product, well it throws it on the floor. But that is pretty much what couriers do right? (If any couriers are reading this we really appreciate your hard work and careful handling of our delicate robotics products (except if you’re the UPS doofus who dropkicked Adafruit’s last order…)). This #MeArm was shipping products all through the Dreamforce conference 2014.

MeArm at the Leeds City Museum

We were lucky enough to be invited along to the March of the Robots event in Leeds in the UK. The plan was to take five #MeArms and five controllers along for some tough product testing in the hands of a hoard of Mine Craft fans! Our luck continued as two students from the Mechatronics and Robotics department at Leeds University joined me for the day to perform much needed running repairs to our prototype robot arms.

The reason we needed the running repairs were two fold. First that some of the bots were the test units coming from our new production line at Loughborough and had more generous tolerances than strictly were required. The second was that it would seem when two or more boys have access to two or more robots they like to make them fight. Since one of our selling points is that the #MeArm is cheap enough to break and simple enough to repair we could hardly put a stop to this primitive version of Robot Wars.

The experience watching how physical kids wanted to be with the robots was invaluable looking at improving the design and of the different prototype control boards we took a long we learned a lot. People like the idea of joysticks and inverse kinematics but with the random movements first attempted by the majority of the kids at the event the direct servo control was easier to grasp and master. The final version should really be able to switch between the two control methods.

It was a great day out and we were really fortunate to be involved. Many thanks to Playful Leeds for having us at the event.